Year of the Dragon 2012 Stamps

Just bought the last of the Year of the Dragon Stamps at Grand Central – sorry! It’s such a pretty design and I tried to buy them at the beginning of the year and they were sold out. But now that I located a picture of it, I found out you can order them online here.

What do you think of the Chinese one and North Korean ones below? 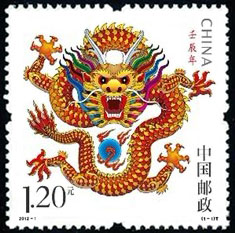 The Chinese one has caused some debate. The creator had meant it to represent a confident China, while some believe it looks scary. “While the Chinese view the dragon as an auspicious and graceful creature, the West has historically depicted dragons as threatening beasts.” Read the full article here.

I like the North Korean ones, but really love all 3 designs. I might have to start collecting stamps. Or at least Lunar New Year animal ones! Here’s a link to Year of the Dragon stamps around the world via vietnamstamp.net.

Using these stamps to send out Mother’s Day cards! Still time to get yours in our Etsy shop.